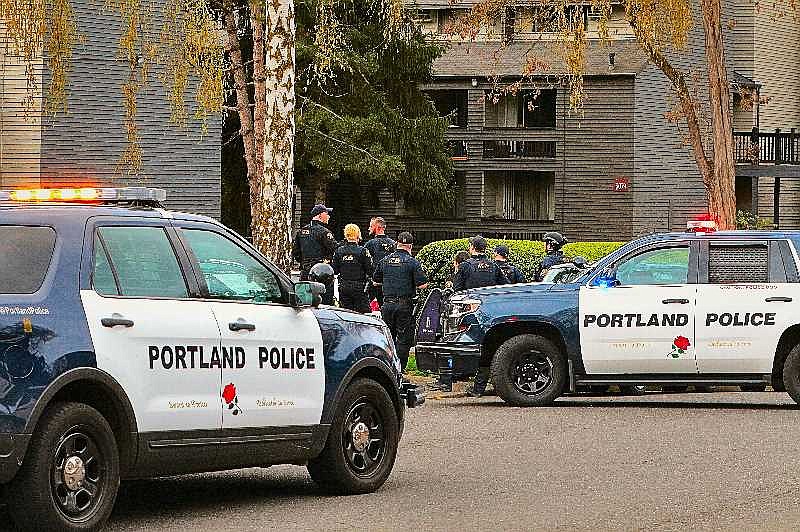 A police dog tracked the suspects into the large nearby apartment complex. Two were found by the K‐9, and were arrested. (David F. Ashton)
By David F. Ashton 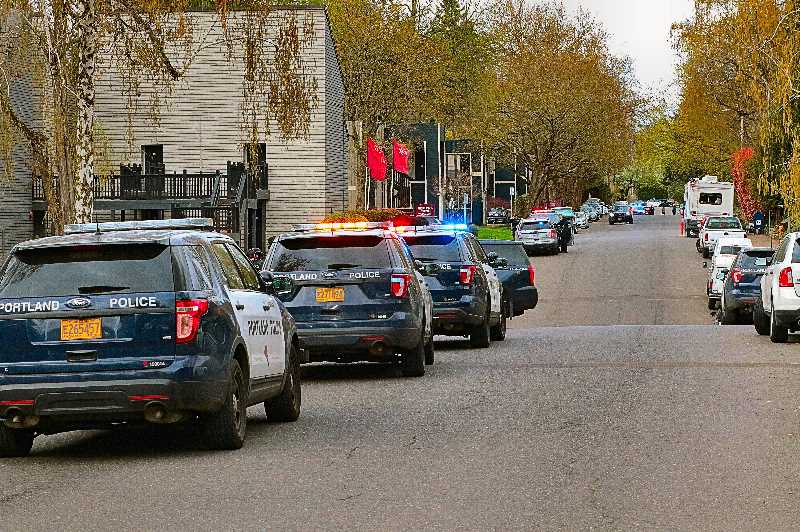 PPB District officers, and those with specialized duties, flood the Reed neighborhood, after suspects with guns were tracked there from the Powellhurst‐Gilbert neighborhood. (David F. Ashton)

A simple traffic stop in the Powellhurst‐Gilbert neighborhood, along S.E. Powell Boulevard near 115th Avenue, ended up 5.2 miles to the west — in the Reed neighborhood, with more than three dozen police officers involved, on Thursday afternoon, March 31.

At 4:42 p.m., two PPB East Precinct officers in a "partner car" initiated a traffic stop in the outer East Portland neighborhood due to a driving infraction.

Instead of pulling over and stopping, the driver hit the accelerator and sped off. As it turned out, the Portland Police aircraft, "Air 1", was flying overhead in that area; and moments later the observation officer in the plane spotted the fleeing vehicle.

That "eye‐in‐the‐sky" officer witnessed dangerous and reckless driving behavior, including high speeds, passing in oncoming lanes, and running red lights. At least one other driver's car was nearly struck by the suspect vehicle, even though no officer was pursuing the car.

Officers from East Precinct, Central Precinct, and the Focused Intervention Team (FIT), plus a K9 unit, responded to assist as the vehicle sped west — mostly on S.E. Holgate Boulevard — before turning south on 28th Avenue.

By this time, a total of 38 officers were involved. After the car stopped on Colt Street, just east of 28th Avenue, three suspects made a run for it on foot.

Getting their scent from the abandoned car, a PPB police dog sniffed out two of the suspects. The third person slipped away from the dragnet that included the large apartment complex at that intersection, and extended about five blocks in every direction, including the Reed College campus.

Two firearms were also found and seized as evidence.

One of those arrested was 19‐year‐old Yonis Jama of Portland. Jama was booked into the Multnomah County Detention Center (MCDC) at 7:42 p.m. that evening on charges of Unlawful Possession of Firearms, Attempt to Elude Police by Vehicle, and Reckless Driving. However, after spending only a few hours in jail, Jama was released, without being required to post bail, on the morning of April 1. (Release Reason: Court Ordered Release of Charges.)

Also arrested was 18‐year‐old Sa'Maurion Niyannah Harris, who was booked into the MCDC at 7:43 p.m. on charges of Unlawful Possession of Firearms. However, Harris was also released, without being required to post bail, on the morning of April 1. (Release Reason: Court Ordered Release of Charges.)

The investigation is continuing by the PPB's FIT and Enhanced Community Safety Team. If you can provide information about this incident, it's Case No. 22‐86121.