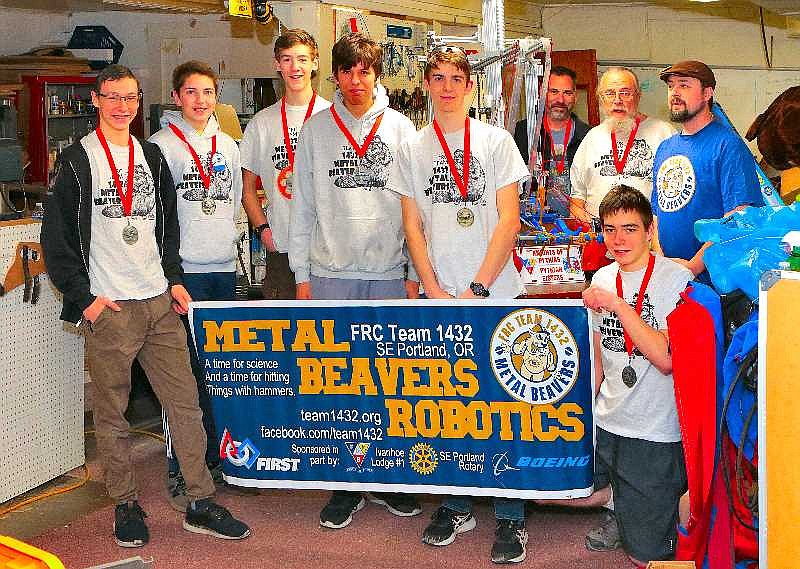 Here are the team members of FRC Team 1432, the Metal Beavers: Elijah Smith, Caleb Corpron, Jonathan Hagen, team captain Ammon Corpron, and Toby Greene; and, lower on the floor, Levi Smith. And in the back, mentors Chad Smith, Alan LohKamp, and Patrick LohKamp back them up. Not present is mascot Declan Marks. (David F. Ashton)
By David F. Ashton 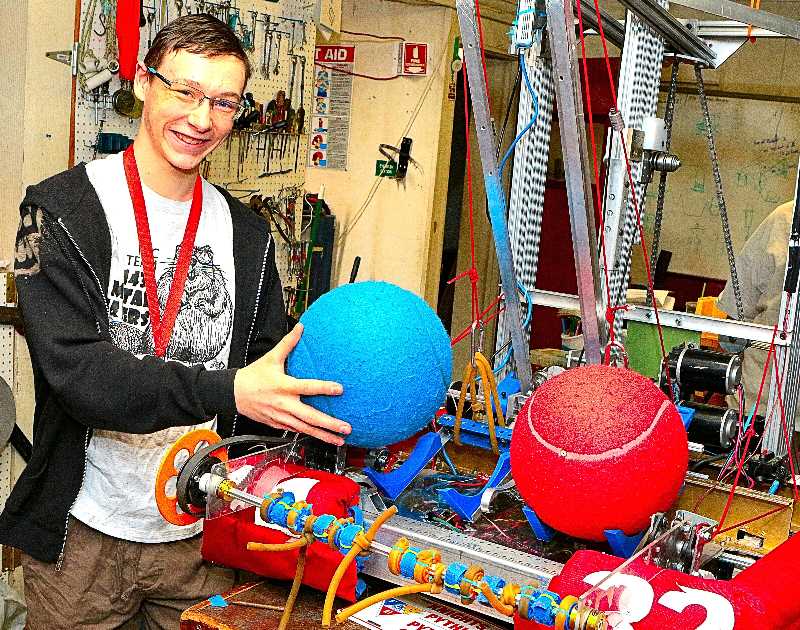 It hasn't been easy for Portland's first high‐school‐based robotics club, FIRST Robotics Competition (FRC) Team 1432 — the Metal Beavers, since they were evicted from Franklin High School back in 2010 for reasons that are still unknown. The event made headline news in THE BEE, and drew anger from FIRST Robotics teams around the world.

However, the nonprofit, FRC‐sanctioned, after‐school robotics club has remained active, since moving the into the basement of Knights of Pythias Ivanhoe Lodge #1 in Lents, where it continues to this day.

In fact, this season, the scrappy Metal Beavers outscored many other teams in the region.

Pointing out that all of their team members were wearing medallions, team spokesperson Ammon Corpron — a junior at Paideia High School in Milwaukie — explained, "These are 'Finals Metals', because we went to the FRC Finals competition at the Oregon State Fairgrounds.

"We did very well; best two of three matches, but we lost on the very last match — the tie‐breaker around — but the score was very close."

"We created our robot to meet the challenge of climbing bars — they're like 'monkey‐bars', but set on an incline, with the top rung being 8'8" high," said Corpron. "Our robot climbed all the way to the top bar, which very few teams could do."

The other way to score was to launch balls into goals. "Everyone else was using friction wheels and motors; we had the only spring‐powered shooting mechanism," said Corpron. "Our robot used elastic to shoot the ball into the high goal — an engineering challenge that we took on, that no one else did.

"All the teams we were playing were very well‐funded — we probably have the least funding of any team in our district," wryly acknowledged Corpron. "At one event, we were the fourth team to go to semi‐finals; and at our next event, we went to State finals. I'm super proud of everyone here, and what we've been able to achieve as a team!"

Although they had won the right to play in the FRC Regional Competition on the first weekend in April at Eastern Washington University, a lack of funding to pay for the trip prevented them from trying to continue their winning streak this season.

"We plan to compete next season," remarked Corpron. "Until then, it's all about testing ideas, coming up with innovating new ways that we can improve ourselves as a team, and improving the mechanical abilities of our robots by developing new systems."

The Knights of Pythias is having a fundraiser for the team. Buy See's Candy through this link, and the proceeds go to support FRC Team 1432, the Metal Beavers — https://tinyurl.com/Metal‐Beavers‐Fundraiser