Oegon Music Hall of Fame President Terry Currier holds a guitar, signed by rocker Rick Springfield on April 3, when he played the Ilani Casino Resort. On the bench next to him is the re‐donated guitar signed by Willie Nelson, and the guitar played by Mot&Atilde;&#182;rhead lead man, Lemmy. (David F. Ashton)
By David F. Ashton 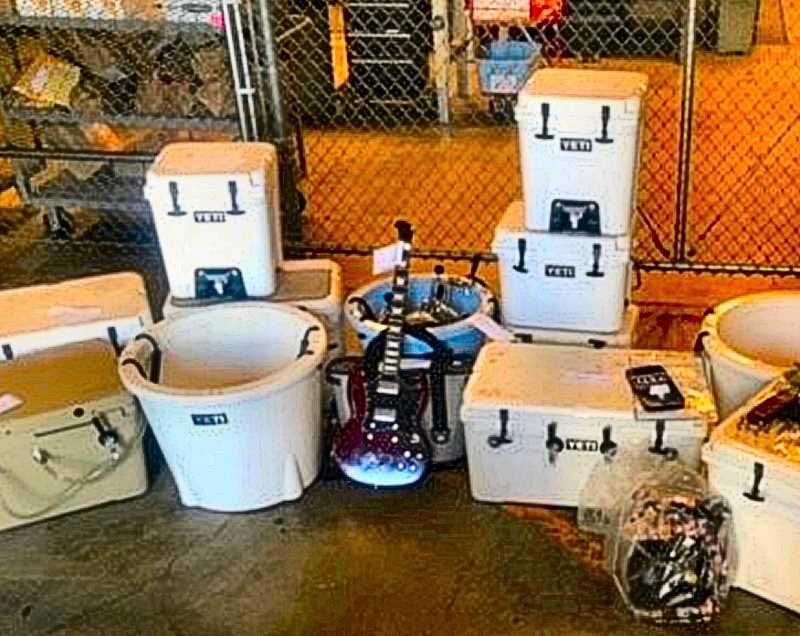 Its difficult to make out, in this low‐resolution photo, but police officials say that this guitar, flanked by recovered Yeti coolers, is one that was stolen from the Oregon Music Hall of Fame. (Courtesy of Portland Police)

As reported in the March issue of THE BEE, irreplaceable guitars, signed by internationally‐famous musicians, were stolen during a burglary of a storage locker rented by the Oregon Music Hall of Fame on February 20.

After weeks of what they called "exhaustive investigation", on March 15, Portland Police Bureau officials said that they'd obtained search warrants that they believed had recovered the purloined guitars and other merchandise.

But after Oregon Music Hall of Fame leaders examined those recovered guitars, hopes were dashed — a large collection of nice‐looking guitars were indeed recovered, but they weren't theirs. The ones stolen are highly collectible autographed and unique guitars, which they auction off at their gala concert held every year in the Brooklyn neighborhood at the Aladdin Theater, on the first Saturday in October (it's October 8, this year), to raise money for music scholarships for deserving students.

Fast‐forward to April 7, when the Central Precinct Neighborhood Response Team (NRT) Officers, along with members of the Special Emergency Reaction Team (SERT) and East Precinct NRT and Detectives served a search warrant in the 100 Block of N.E. 117th Avenue — just north of East Burnside Street — related to this investigation.

There, investigators recovered one signed OMHoF guitar, along with other stolen items. Local news media had reported that two stolen guitars had been recovered, but in fact there has only been one so far, as we confirmed with Hall of Fame President Terry Currier when we spoke with him in his office in Music Millennium.

"That guitar is still being held in evidence; but, just looking at the photo, the guitar looks a little beat up," Currier observed with regret. "We are still hopeful that more of these guitars will be located — and hopefully, in good enough condition to be used to raise funds for our OMHoF Music Education programs."

The good news, Currier disclosed, is that they've had three guitars they'd previously auctioned off donated back to their organization.

"One of them, a guitar signed by Willie Nelson, is pretty special for several reasons," Currier said. "Willie's 89 years old now; and he's truly one of the biggest artists that's still playing. This guitar was signed by Willie when he played at Edgefield Manor a couple summers ago.

"The guitar was auctioned, and raised a great deal of money for the Oregon Music Hall of Fame. The gentleman who purchased it, Rob Ayres, heard about the stolen guitars, and donated it back to us for an upcoming auction. His gesture of kindness and generosity is amazing."

Currier also told THE BEE that another person who'd bought at auction a guitar signed by k. d. lang has also decided to donate it back to be re‐auctioned. "It's clear that our work with music education and scholarships for the kids really hits a positive heart‐string with many people out there," observed Currier.

Showing a burgundy solid‐body guitar, Currier said it was originally played by leader of Motörhead, Ian Fraser Kilmister — better known as front man "Lemmy", who passed away in 2015. "The band toured through Portland regularly; so, this is going to be a desirable guitar in the auction."

The main suspect in this case, 40‐year‐old Eric Michael Lamberton, was moved to Inverness Jail, where he remains in custody in lieu of $275,000 combined bail — even after dozens of charges against him were "released" by the court.

If you know something, you can send an anonymous tip to Crime Stoppers of Oregon — and perhaps receive a reward of up to $2,500 cash — for information submitted at their website — http://www.p3tips.com/tipform.aspx?ID=823#.

And, for more information about the Oregon Music Hall of Fame, go online — http://www.omhof.org