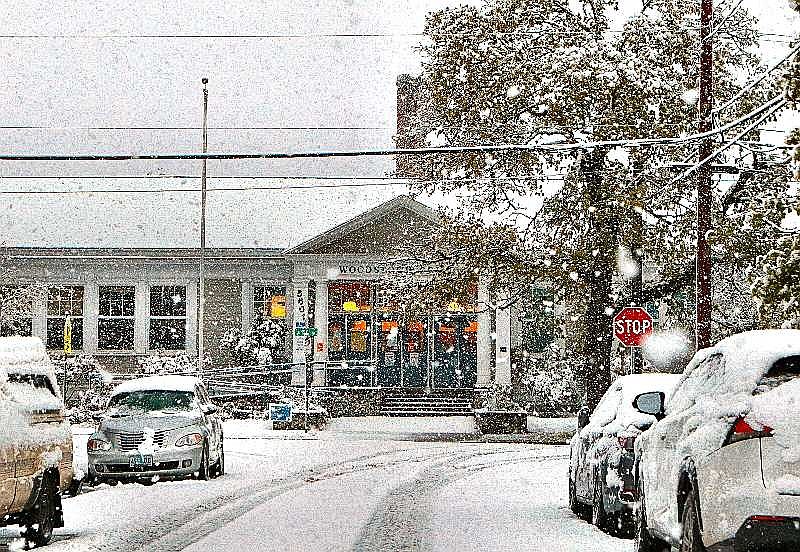 Although the area experienced the warmest day of the year so far ‐ at 77 degrees ‐ just the week before, it was a Snow Day for students at Woodstock Elementary School, and the rest of the Portland Public School system, on Monday, April 11 (David F. Ashton)
By David F. Ashton 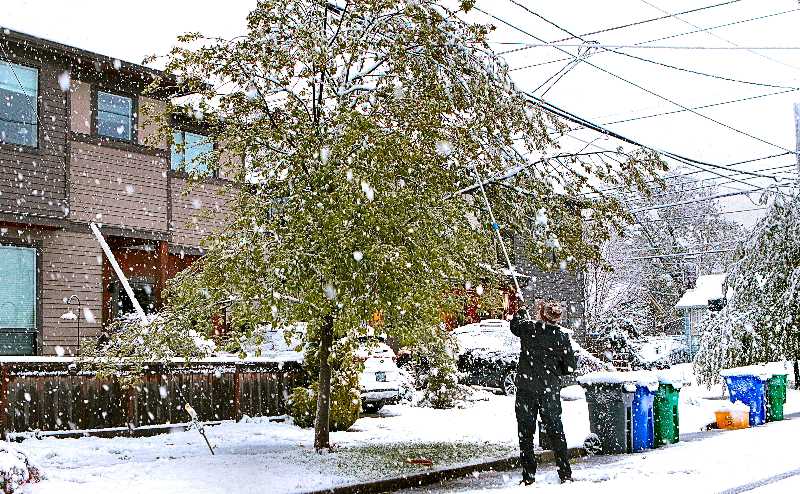 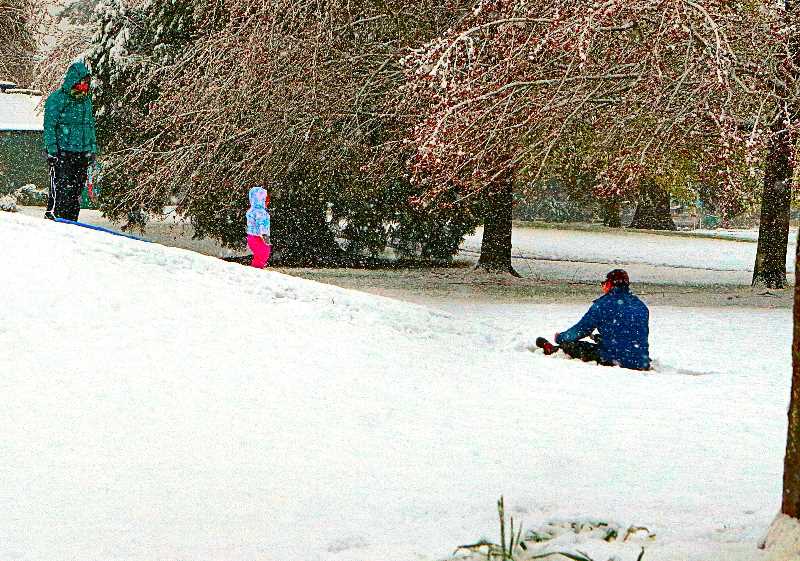 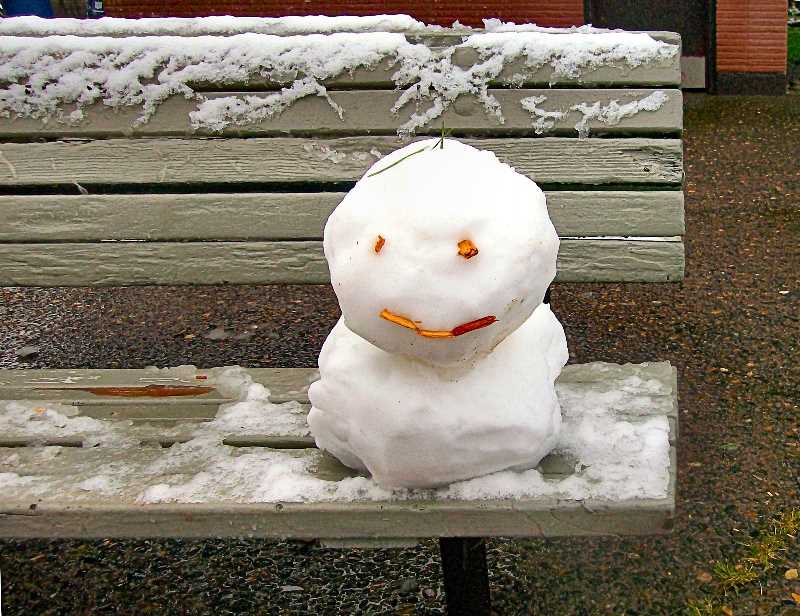 Without enough snow to make a full‐size snowman, someone left this snow gnome on a bench near Brooklyn Park. (Rita A. Leonard/The Bee News) 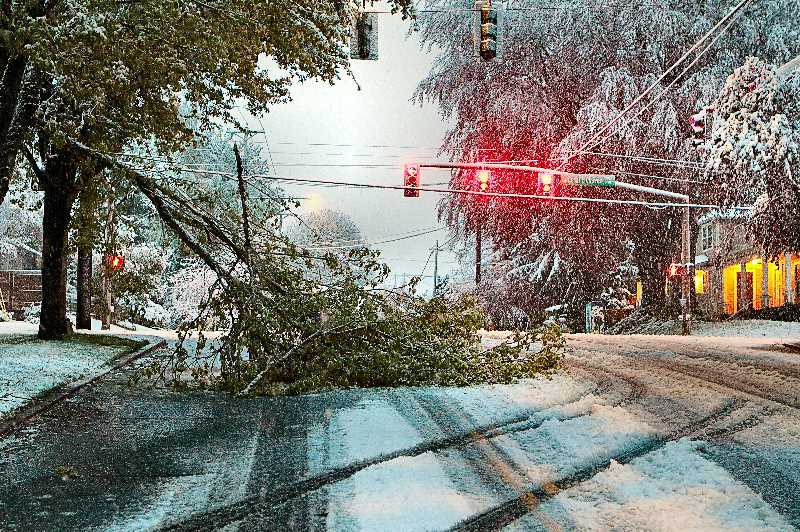 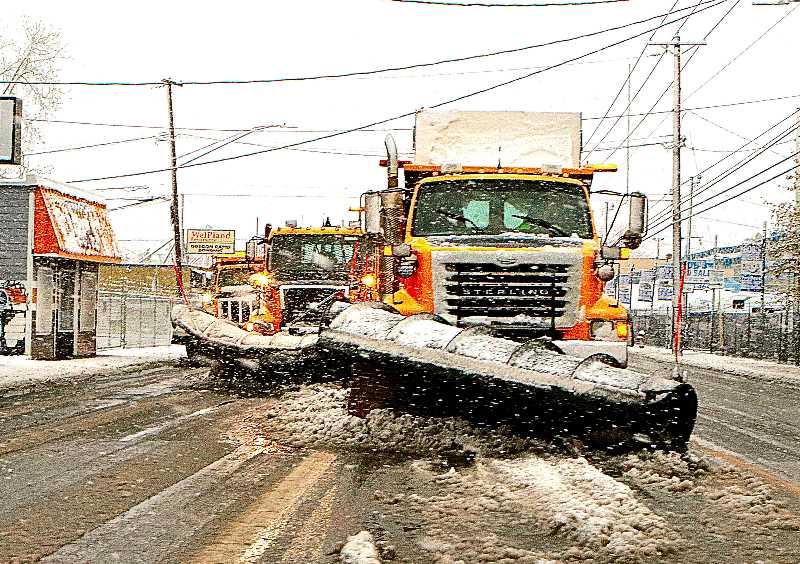 After we experienced temperatures in the upper 70s on April 7, it looked like summer would be arriving early in Inner Southeast Portland.

Even though local television stations posted reporters in the West Hills for snow flurries at higher elevations late Sunday evening on April 10, most folks in our area would have never guessed they'd wake up to snow on the ground on April 11.

Never before had Portland ever experienced more than a dusting of snow in April. First, PPS and other schools announced a two‐hour delay — and then the unbelievable: Complete closure, due to snow. A "Snow Day" in April!

During our early‐morning our tour of Inner Southeast Portland neighborhoods, the streets were empty. The soggy, slushy precipitation which was underway by 4 a.m., although white and cold, didn't yet lend itself to outdoor play.

Small differences in elevation made a considerable difference in how this snowstorm was experienced. In Sellwood, Westmoreland, and Brooklyn, the giant, wet snowflakes were slushy as they hit pavement and lawns, although the snow began to accumulate after dawn.

THE BEE traveled east up S.E. Woodstock Boulevard, carefully dodging large broken tree limbs in the street, from S.E. 28th to César E. Chávez Boulevard (formerly 39th) and into the Woodstock business district, where the scene had transformed into a winter wonderland, with snow piled deeply. Parks, streets and throughout the Reed, Creston‐Kenilworth, Foster‐Mount Scott, and Brentwood‐Darlington neighborhoods looked like a full‐on winter snowstorm, with a thick blanket of snow.

"This weather event is unprecedented — having measurable snowfall this late in April! It's clearly a first‐ever event, according to records going back to 1940 at the Portland International Airport, and going back to the 1890s for downtown Portland," said National Oceanic and Atmospheric Administration (NOAA) Meteorologist Colby Neuman.

"However, this was not at all a surprise to us," Neuman told THE BEE. "As early as Saturday, we saw a pattern emerging that was favorable to producing snow — like we'd expect to see in January. Our only question was where it would happen."

Meteorologists were tracking a low‐pressure system, laden with moisture, moving east over the Pacific Ocean. "What was unknown was whether this 'low' would dip south, coming in over northern California and southern Oregon; or break north, become a blizzard in Seattle; or, do what it actually did — slide in, just south of the Portland area," explained Neuman.

"Then, overnight, when cold, dry offshore winds [coming down from Canada, channeled east through the Columbia Gorge] met the moisture‐laden low pressure front, that was a 'perfect recipe' for snow in the Portland area," Neuman pointed out. "Interestingly, while we measured snow depths of 1.6" at the NOAA weather station in Parkrose and 2" downtown, the lowest temperature recorded at the airport was 33 degrees."

As weather conditions lingered, Southeast Portland saw quite a bit of rain for several days afterward. "Some of it came in with graupel [a kind of snow]. Depending on elevation, one could see snowflakes mixed in with the precipitation," Neuman acknowledged.

About the future, Neuman remarked, we should expect a "normal" spring season. "Here, our springtime weather is longer than in most places; it begins in February, and typically ends sometime in May."

Storm exits with a bang

Although the snow melted off, for the most part, by the end of Monday, April 11, wintry weather for April continued for the rest of the week. Periods of clear skies and sunshine were followed by heavy downpours and occasional sleet.

After sunshine on Wednesday afternoon, April 13, that evening dark ominous clouds rolled in about 7 p.m. Amid isolated crashes of thunder and lightning flashes, a considerable amount of pea‐sized hail pounded down, coating the ground in most areas.

In the meantime, take a few minutes to "Ride along with THE BEE" through the streets of Southeast Portland in our historic April snowstorm — https://youtu.be/s3uhOlZfx4I