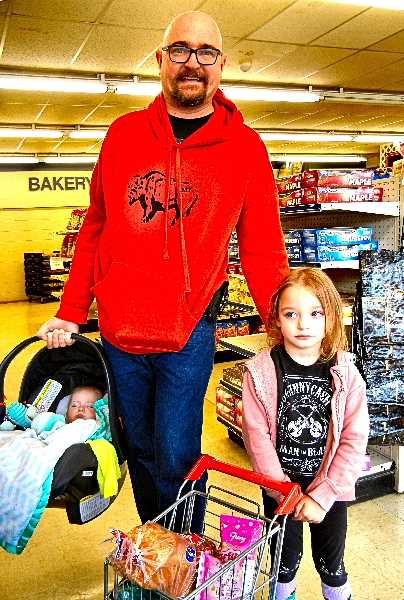 On the day before the Franz Bakery Outlet permanently closed, Allen Sands was shopping for his gluten‐free products, and for bakery items for his family. Four year‐old Isabelle liked the &quot;kiddy cart&quot;, and 5½ month old Addison slept through the shopping. (Elizabeth Ussher Groff)

After over thirty years in business at S.E. 45th Avenue and Harney Street, it wouldn't seem right to let the Franz Bakery Outlet Store close without an explanation. And indeed, late Thursday afternoon, April 14, it did close its doors forever.

Franz does not own the property, and with the expiration of the lease, the company decided to close the store due to problems relating to the exterior of the building. "We have been honored to serve the community, but the store has been under tremendous stress with the encampments," admitted a Franz executive. There had been recent reports of crime resulting from encampments across the street, and along the nearby Springwater Corridor.

"It has been a constant battle with people cutting open the gate, blocking the fire hydrant, and having employees fearing for their safety," continued the Franz executive. Company executives and employees declined to be named and quoted.

The store, just north of Johnson Creek Boulevard in the Brentwood‐Darlington Neighborhood, was valued by its many customers from Southeast Portland neighborhoods near and far. One employee remarked, "This is a very special community."

Anyone entering the store could find shelves filled with organic, keto, and gluten‐free breads, along with many varieties of more traditional breads, Franz English muffins, preserves and jellies, Glory Bee raw honey, fruit pies, Nutella, and "breakfast breads" — lemon crème, cinnamon raisin, cinnamon swirl, as well as many specialty items from around the country, such as Little Debbie pastries. All made a great start to the day for many people.

A wide variety of cookies and Bob's Red Mill products, a varieties of chips, pretzels, pasta, condiments, Bear Creek dry soup mixes, along with milk products in the cooler, were purchased by over a hundred customers a day.

Some bread products were "day old" and priced below the items that were fresh. Some fresh breads were competitive with nearby grocery stores and supermarkets, but priced lower.

On April 13th, one day before the permanent closure, the usual stream of customers came through the door all day long. Some were surprised, and some were shocked, to learn of the closure. Most seemed unaware of any problems — probably because these had mainly happened at times when the store was closed.

Allen Sands, who lives in the Hosford‐Abernethy neighborhood, was there with his four‐year‐old daughter Isabelle (who was filling her mini cart with items) and his 5½ month old daughter Addison in a baby carrier. "I have celiac disease, so I come here for gluten‐free and other things for my wife and family. I didn't know it was closing. It is really sad," remarked Sands.

Bruce Hadfield, longtime Eastmoreland resident, said he had been patronizing the outlet store for at least 30 years. Asked his reaction to the closure, his immediate pithy response was, "Mad." He informed THE BEE, "We come here once a week for certain breads that I like. You can't find some of these breads in the stores. It's irritating [that they are closing]."

The history: Franz Bakery began when Engelbert Franz, at the age of 15, immigrated to the United States in 1896 to work in his uncle's bakery in Portland ‐‐ the United States Bakery. Franz headquarters are still in N.E. Portland on 11th and Davis. With 67 outlets in the Northwest, including Idaho, Montana, Washington, and Alaska, it has recently expanded into California.

Now, if you are among the many who feel devastated at the store's closing, take heart — apparently none of their other Franz Outlet stores are closing; and the nearest one to the closed store is located at 11540 S.E. Foster Road. The telephone number there is 503/761‐2412.