A final goodbye to the feral cats of the Springwater Trail 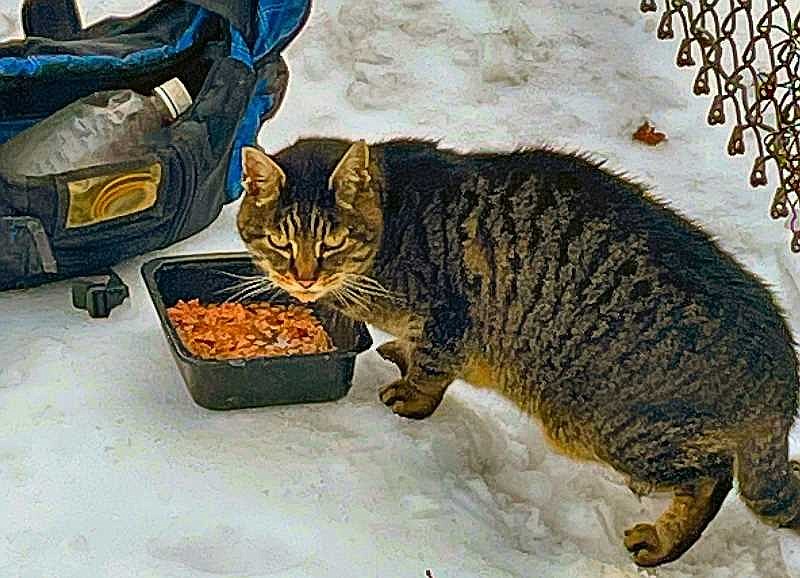 This was Tigger, seen here alongside his kitty condo, constructed by the team of cat caretakers known as the Cat Posse. Tigger lived a long life in a managed feral cat colony along Southeast Portlands Springwater Corridor near the Ross Island Bridge. The tabby was well‐known to hikers, runners, and bicyclists who used the popular trail. He was the last cat from the original 18 kittens (Courtesy of Gary Quinn)
By Paige Wallace 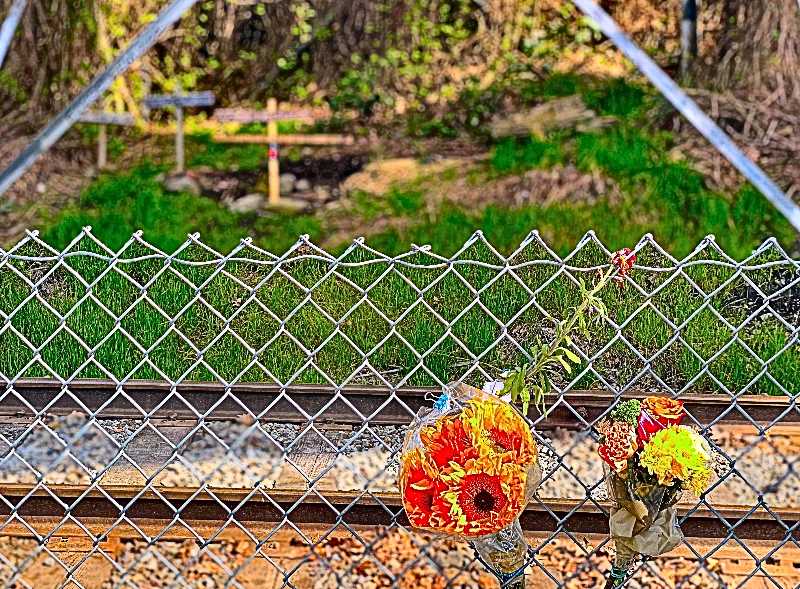 Flowers and crosses mark the gravesites of cats from a longtime feral cat colony along the Springwater Corridor bike path. The final member of that colony, Tigger, died March 19 at the age of 17. (Paige Wallace) 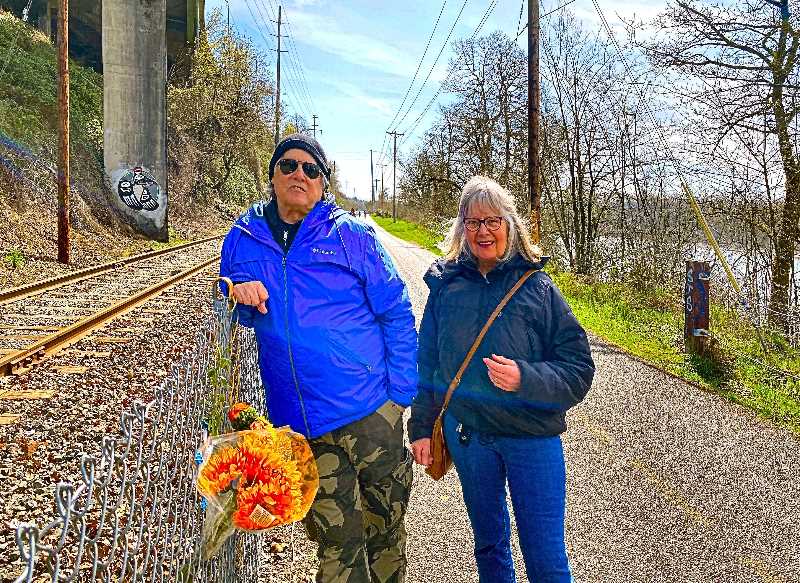 Feral cat caretakers Anne Fischer and Bruce Wayne ‐ members of the Cat Posse ‐ pause in front of the site where for years they fed and protected a colony of neutered feral cats near the east end of the Ross Island Bridge. (Paige Wallace)

For nearly two decades, users of the Springwater Corridor have walked, run, or biked past a colony of cats living near the Ross Island Bridge. They've seen the feral felines playing on the hillside beside the railroad tracks, and resting in their kitty condos. Last month, that managed colony lost its final member, Tigger. The 17‐year‐old tabby died on March 19 following a serious injury and a cancer diagnosis.

Tigger was part of several litters of kittens born or dumped in the area in 2005. They were too old to be fully tamed, so volunteers humanely trapped, neutered, and returned them to the area (a practice known as TNR).

"Everybody knew them," remarked Westmoreland resident Anne Fischer, one of the cats' regular feeders. "They had quite a following!"

Fischer and Gary Quinn, who lives in Ladd's Addition, cared for the colony alongside a group of other cat lovers who met on the trail. They named themselves the "Cat Posse" once they started the daily feedings. They coordinated their schedules to ensure the cats had food each morning. They also filled plastic tubs with hay to create kitty condos that kept the cats warm and safe at night. The Cat Posse provided basic veterinary care, and rehomed tamer cats which showed up unexpectedly.

In late February of this year, Tigger began limping badly. Quinn tried luring him into a humane trap to take him to a vet, but couldn't catch the wary feline. Over the next few weeks the injury seemed to be healing. Then, on March 19, Tigger suddenly became lethargic. Quinn easily caught him this time — a bad sign — and rushed him to Dove Lewis Emergency Animal Hospital.

There, a vet diagnosed Tigger with multiple infected wounds, and suggested that a larger animal had attacked him. Just as tragically, a blood test revealed he was also suffering from end stage kidney disease. So that night Quinn, and another cat posse volunteer. stood by Tigger's side as he was humanely euthanized.

"It was a terrible day," Quinn sighed. Fisher chimed in, "But I'm grateful he was inside and surrounded by people who cared about him."

The cat posse gathered on the trail the next day for a small funeral, remembering Tigger as a feline Huck Finn who lived out a grand adventure. They buried Tigger alongside his colony‐mates Bumper and Shadow, who had passed away in 2014 and 2018, respectively. All three graves are marked by wooden crosses, which Quinn constructed. Attendees left flowers on the fence as a tribute. Trail users have since added to the impromptu memorial.

Alongside the bouquets, Quinn posted a note to the public. It told of Tigger's death and described him as a beacon of hope — a tribute that had been shouted out by a runner one day as he jogged past Quinn and the cat. "This feeding station is being permanently closed," the note concluded.

Meanwhile Fischer announced Tigger's death to Inner Southeast Portland residents via social media. "It was so important to put that notice in NextDoor," she explained. "Hundreds of people, trail users, have watched those cats for 17 years!" More than 150 people responded with reactions or comments.

"Thanks for posting this. Always happy to see him on my bike rides. RIP Tigger," commented Diane Lozovoy, who lives in Eastmoreland.

"I loved that colony of cats; I used to stop and pet some of them one my way to work," wrote Aliza Earnshaw of Sellwood‐Moreland. She observed that the wary cats only occasionally let her make such contact.

Members of the Cat Posse, who are mostly retired, said they'll now spend more time nurturing their already tight friendships with each other. "It started out with us all loving cats," Fischer recalled, but it quickly became much more personal. "It's the camaraderie that keeps going; the bond you have," added Bruce Wayne, another of the cat caretakers.

They'll also have a little more change in their pockets. Since 2005, the Cat Posse has paid for all of the colony's food and veterinary care. Occasionally a trail user would stop and hand them $20 to help out, Wayne said, but the financial responsibility ultimately fell to the members of the group.

In the days to come, Fischer, Quinn, and Wayne are concerned about people dumping cats at the site. They want to make it clear that the colony is over, and unwanted animals deserve a better life. "How meticulous we were for 17 years, to make sure no other cats joined them. We're not doing that anymore," Fischer said firmly.

For Quinn, protecting the Springwater Corridor feral colony has been a life‐altering journey. "Those cats…" Quinn trailed off as he pondered Tigger and the other ferals that let only a few special humans into their wild world.

"Those cats and I got old together," he added, finally.